It was a lovely day for a Skytrain/walk to the Farmers Market in New Westminster, BC, late this afternoon. We checked out Tipperary Park, and concluded in the early evening with some time on the river boardwalk. 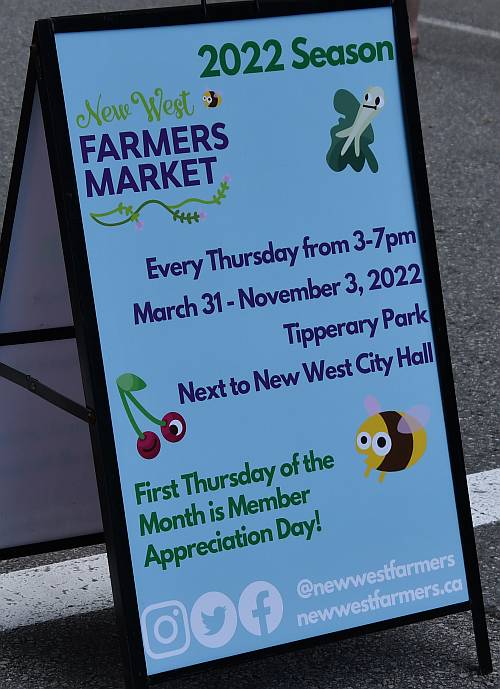 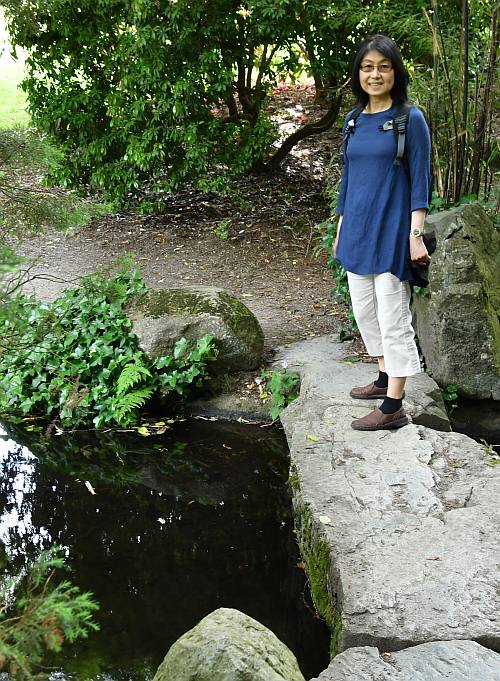 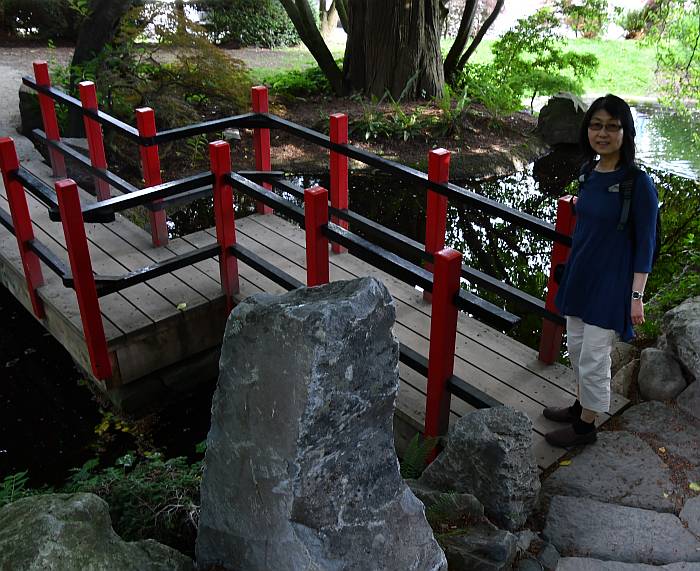 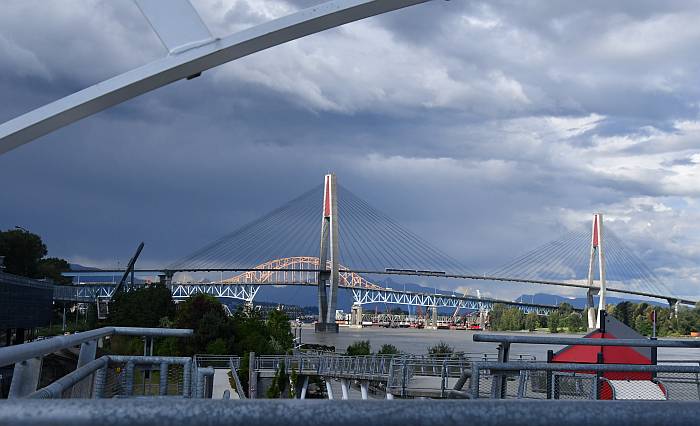 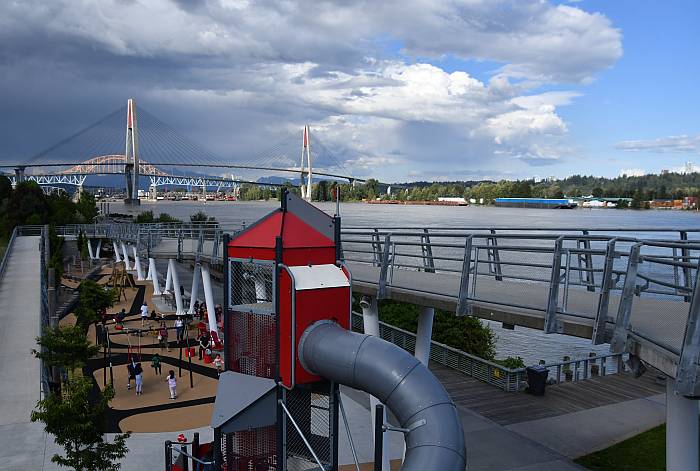 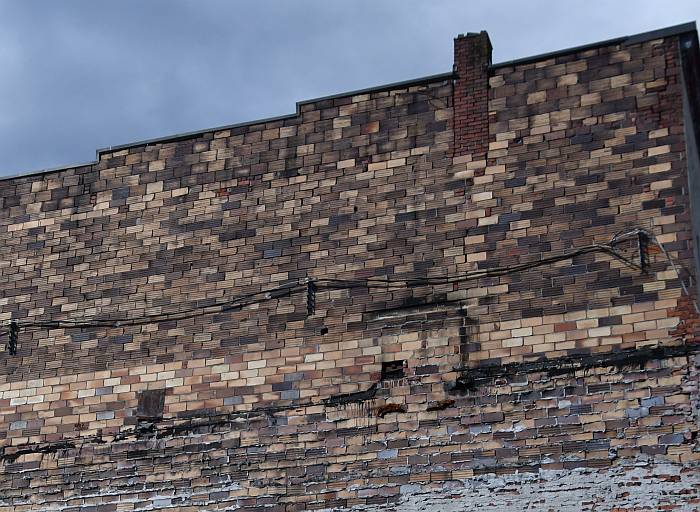 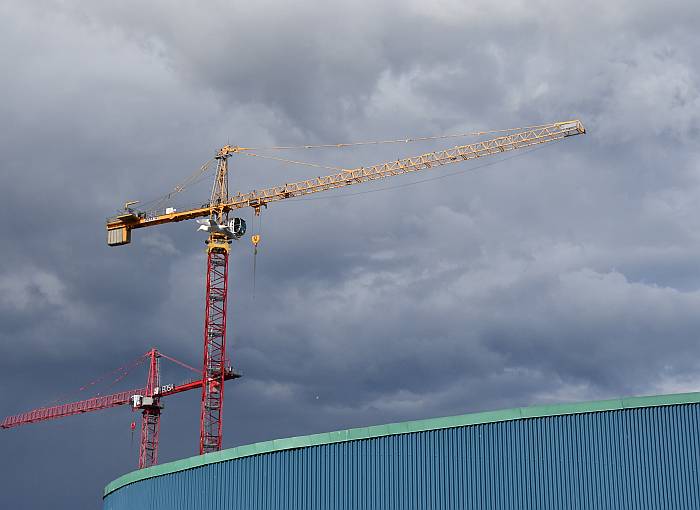 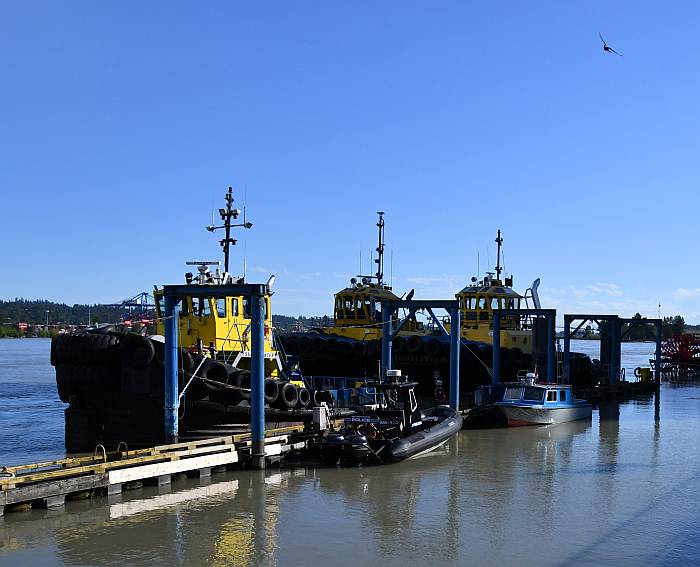 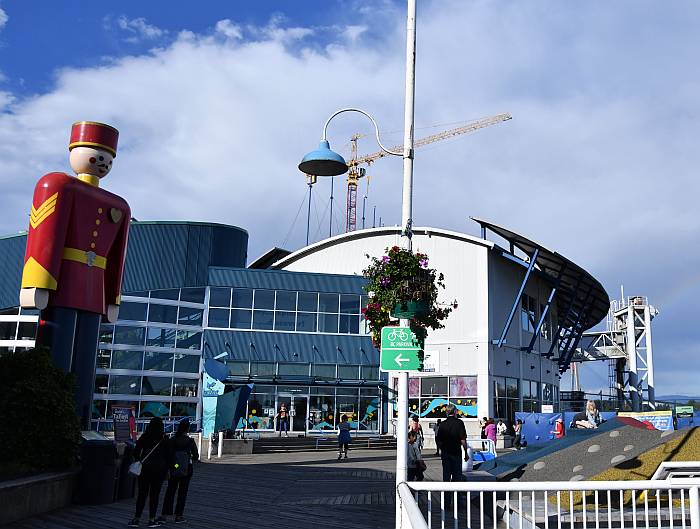 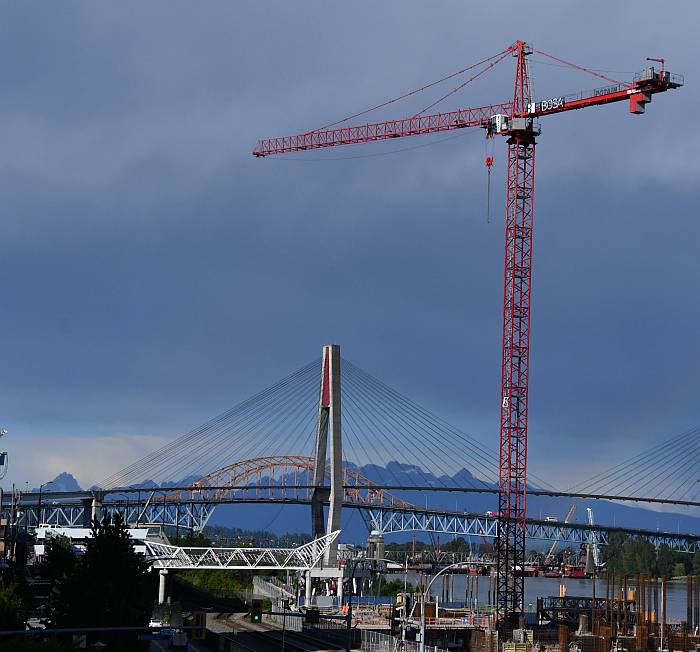 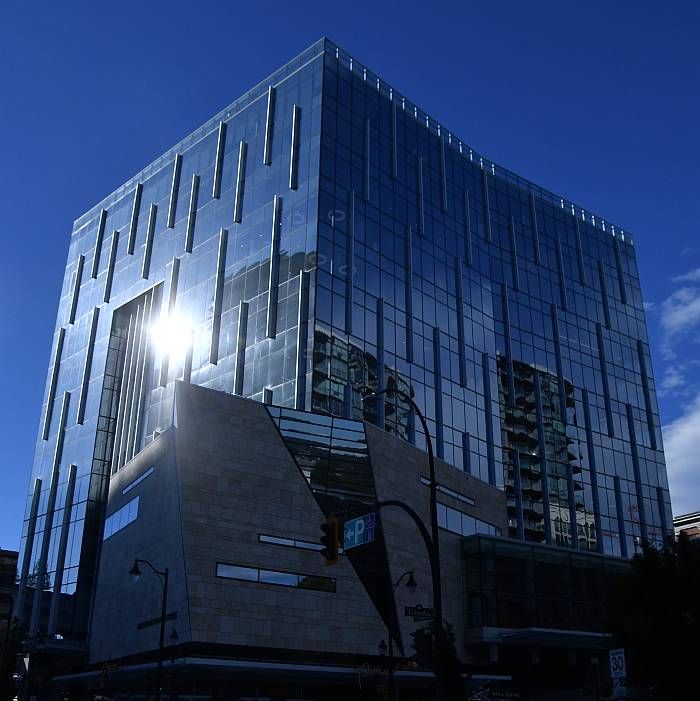 After our morning walk on Byrne Creek in SE Burnaby, BC, we walked up the hill to the Nikkei National Museum and Cultural Centre to take in the Nikkei Garden Farmer’s Market. 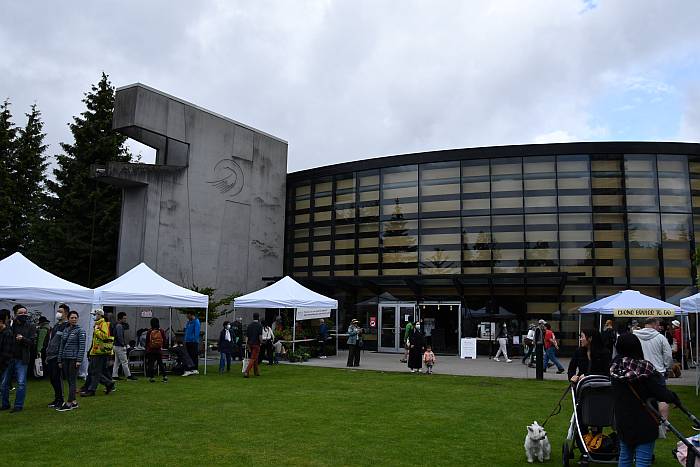 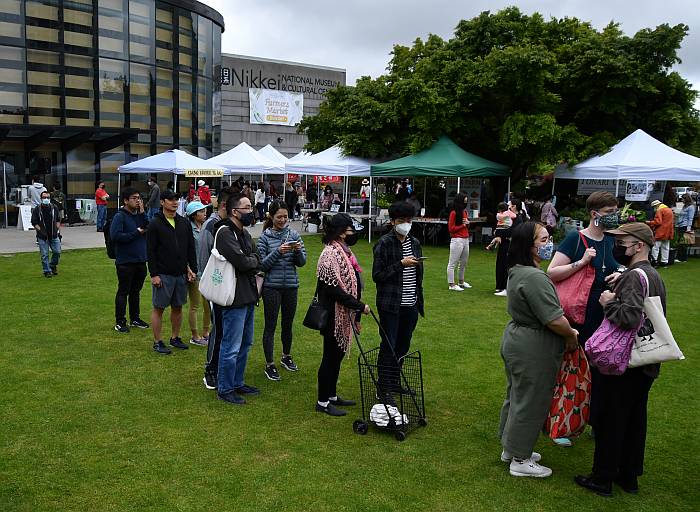 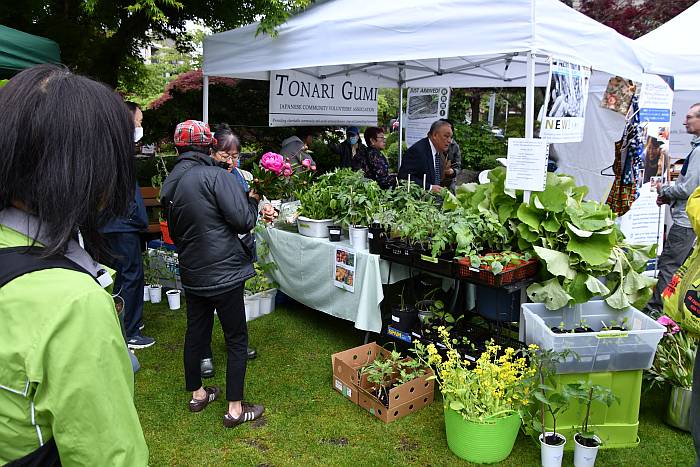 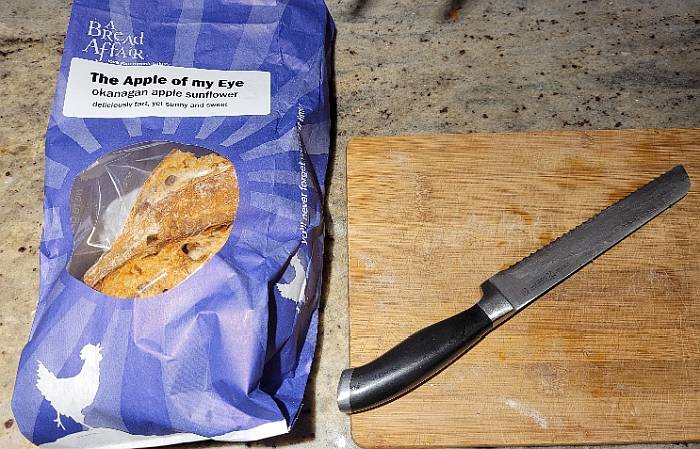 We scored a delicious Okanagan Apple Sunflower loaf from A Bread Affair.

Putin’s paranoia reaches new heights, or should that be 6-foot depths, as new Russian ban on Americans includes some dead individuals:
“Russia bans more than 900 Americans from entering the country, including President Biden and Secretary Blinken: Russia published its updated “stop list” on Saturday, banning a total of 963 American officials and figures from entering the country.
“The updated list included the majority of US senators and members of the House of Representatives, former and current government officials, journalists, military personnel, advocates, citizens, CEOs — and even a few deceased individuals.
“Longtime Arizona. Sen. John McCain and Defense Intelligence Agency Deputy Director Melissa Drisko, who both died in 2018, were included on the list. . . ”
(CNN)

I’m curious that if the “majority of US senators and members of the House of Representatives” were banned, who is in the minority . . . and more importantly, why?

Sometimes I’m not that keen on “progress.”

I took the car in for scheduled service today, and while it was in the shop for about three hours, I wandered up Willingdon to the “Amazing” Brentwood here in Burnaby, BC. Had not yet been in the redeveloped mall.

Yes, it’s impressive in some ways.

But overall I found the ramble along kilometers of concrete sidewalks amid the ever-increasing density of massive new towers diminishing and depressing.

Yes, I know. People need places to live and to work. But the pyramid scheme of “endless” growth on a finite planet is increasingly troubling.

Perhaps I’m sounding NIMBY-ish on a city-wide scale. Perhaps for younger generations oceans of concrete and asphalt are “home.”

But give me lush forests, give me healthy creeks and lakes teeming with life other than human. . . We still have that in Burnaby. But it’s increasingly being hemmed in by walls of glass and steel.
Came across these buttons tonight. They must date back at least 40 years judging by other ones in the same container.
A never-ending fight, but one that must be fought every day. 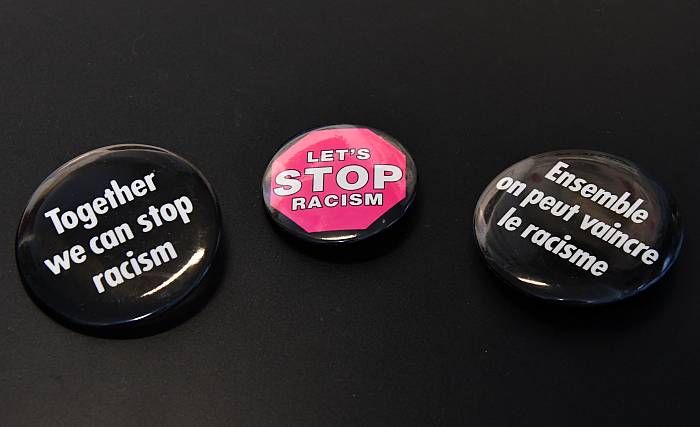 For several years now, a popular topic has been pondering “what brings you joy?”

The answer for me is simple — being outdoors in nature.

Increasingly arthritic knees and hips be damned (I have good days and not so good ones in that department), within a minute of being out the front door and on my way down a Byrne Creek trail in SE Burnaby, BC, my spirits soar.

Let me see a salmon spawning, an eagle soaring, an owl silently staring, and my aches melt away.

It’s that endorphin surge of excercise and the primal heightening of the senses.

We are blessed here in Burnaby, with many salmon-bearing streams and a variety of parks with varied ecosystems.

I walk at least an hour a day, sometimes two or three, as work and other committments allow.

I feel fortunate to live in such an amazing place.

It increasingly appears that Putin has lost the war he started. Nothing has gone as he thought it would.

Far from welcoming Russian forces with open arms, Ukrainian men and women have fought back with dedication, tenacity, and furiousness beyond anything he anticipated.

It is clear that Russian forces are not into the fight, abandoning tanks and equipment, and crying on camera when captured.

It is only those who do not see what’s happening on the ground who are still firing cruise missiles, rockets, and long-range artillery.

Thousands of Ukrainian civilians have picked up arms to defend their homeland. More thousands of diaspora Ukrainians are trying to get back to the “old country” to fight.

With bombing and missile attacks on Ukrainian schools and hospitals, even maternity wards, Putin has committed war crimes.

Putin is apparently now taking his frustrations out upon the FSB, the decendants of the KGB where Putin put his psychopathic talents to use in his younger years.

Unfortunately, thousands more will die and be injured in this madman’s quest — for what?

For a renewed empire?

Putin is waking up people all over the world who have Ukrainian roots, those who support them, and those who cherish freedom and democracy.

I was a “Super-Uke” in my youth and early adulthood.

And eventually I burned out and abandoned most of my Ukrainian connections.

I went to Japan to teach English for over a decade, and then do journalism for Tokyo-based English-language news services for a few more years. That was about as far away as one could get from Ukrainian-Canadian issues

It wasn’t until after I returned to Canada in my 40s that I started gradually returning to the Ukrainian world, assisting an aunt and my late mom in translating and editing some 20 volumes of Ukrainian literature into English.

My Ukrainian is very rusty now, after several decades of little involvement with the Ukrainian-Canadian community.

But, Putin, you’ve inspired me to be more active, to perhaps polish my weakened language skills.

Putin’s treachery, lies, and war crimes against civilians are goading  people around the world to stand, and to fight.

P.S. I don’t hate Russians, I love your resistance. I just hate Putin and the oligarachs.

You all deserve better, and I admire your protests.

This is going to be bad. Very bad.

The world stood by, the world didn’t believe Putin was willing to start WWIII to reimpose a Russian Empire.

So now what is the West going to do? Declarations and condemnations mean shit.

The tyrants are slavering, Lukashenko is also letting loose his dogs of war upon Ukraine from Belarus, like a small schoolyard bully who throws a punch after the bigger thugs start beating the innocent.

And keep an eye on China, this Russian “distraction” may be the perfect time to swallow Taiwan.

Meanwhile Ukraine and its citizens will fight as long and as strongly as they can.

Remember that Ukrainian partisans simultaneously fought both Nazi and Communist forces during WWII.

Historians have called Ukraine “The Bloodlands.” I’m not a praying man, but I hope this latest incursion won’t result in the deaths of hundreds or thousands. . .
I’m finding the overall namby-pamby Western response to Putin’s manipulation toward WWIII dismaying.
Have we not learned anything? He’s a bully, and thrives on bullying. Perhaps we need some kindergarten teachers to step in where our political leaders will not.
This is bully behaviour, and needs to be nipped in the bud.
You name the metaphor, inch/mile, whatever.
He’s clearly stated he misses the days of the USSR when millions were killed, or enslaved, or sent to moulder in prison gulags in Sibera — by their own government.
The past he seeks to restore was horrific.
The past he seeks to restore benefited the Russian 0.5% — take your era, be it Tsars and the aristocracy, be it the Soviet leaders and their dachas, be it today’s toadies and corrupt “elite.”