How about a “Salmon Rescue Plan” for Byrne Creek in Burnaby, BC, dating back to October 1995?

Found in a box of records collected by the late Ken Glover, one of the Vancouver Angling & Game Association members who began cleaning up Byrne Creek about 30 years ago.

I am struck by how many of the issues/impacts on the creek have little changed in all those years. . .

We are still seeing regular sediment flows from construction sites, we are still having pollution events, and we still have nearly no systems (particularly on City land and around City buildings) to “hold back, filter and gradually release rainwater runoff.”

The photo is hard to read, so allow me to share the last two paras:

“The Byrne Creek volunteers have one major frustration–the water quality sometimes kills the fish. The quality deteriorates most following a rainfall after a prolonged dry spell. Toxic chemicals and silt wash down from roads, lawns, and construction sites.

“The runoff pollution is getting worse as construction increases in Edmonds, which is slated for a major population increase.”

Uh-huh. . . Just in the last few months volunteer streamkeepers and concerned citizens have been calling the City about repeated silty flows from construction sites, and other spills into the creek . . . 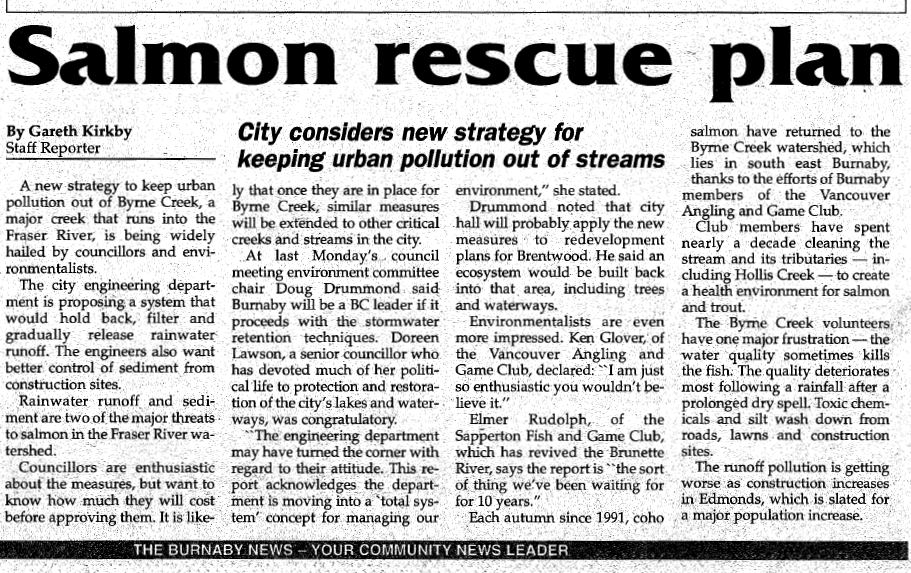