Burnaby MLAs Jane Shin, Raj Chouhan, and Kathy Corrigan, and MP Kennedy Stewart, toured Byrne Creek in SE Burnaby, BC,  today. Volunteers from the Byrne Creek Streamkeepers Society led the tour, and talked about the importance of urban biodiversity, the salmon lifecycle on the creek, and shared some of the activities and data collection that streamkeepers have been conducting annually for many years. 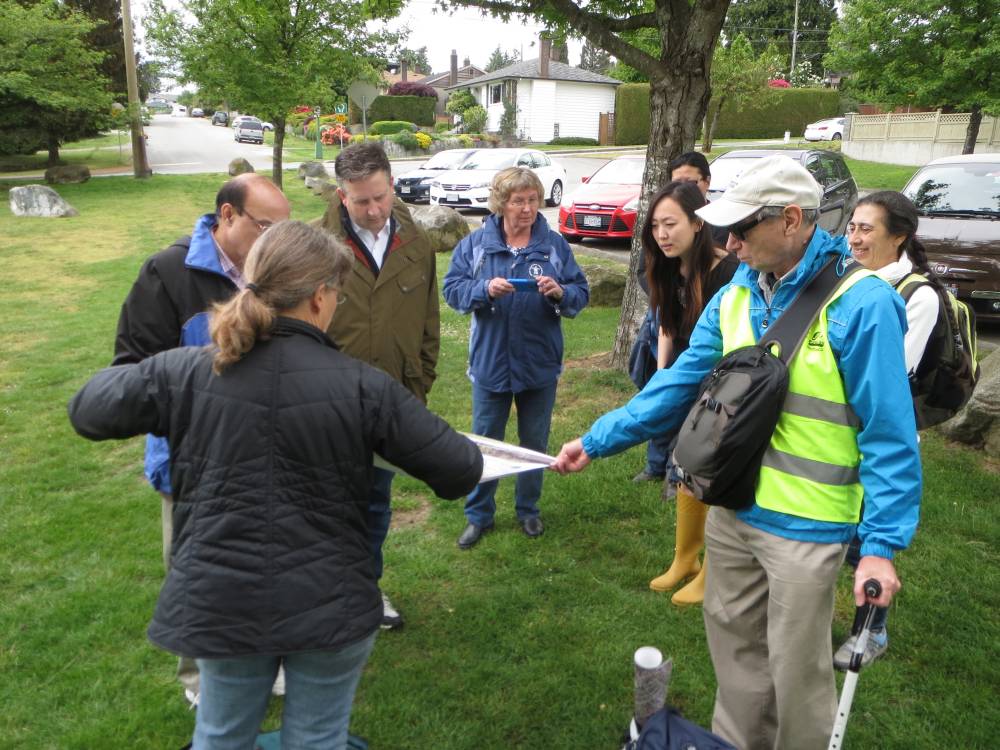 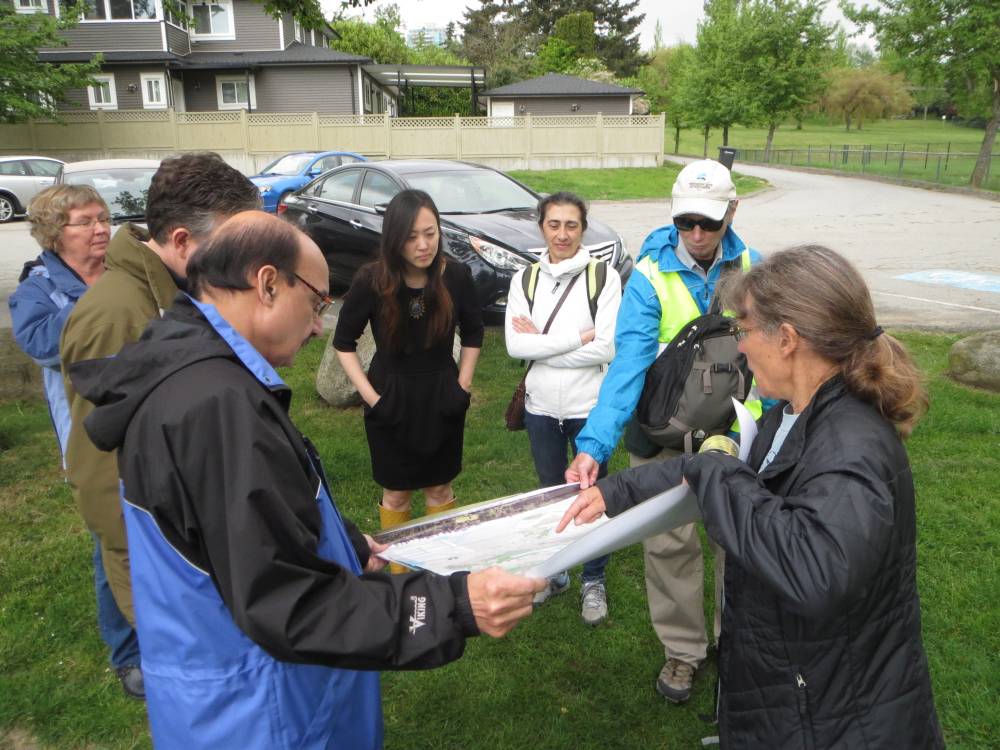 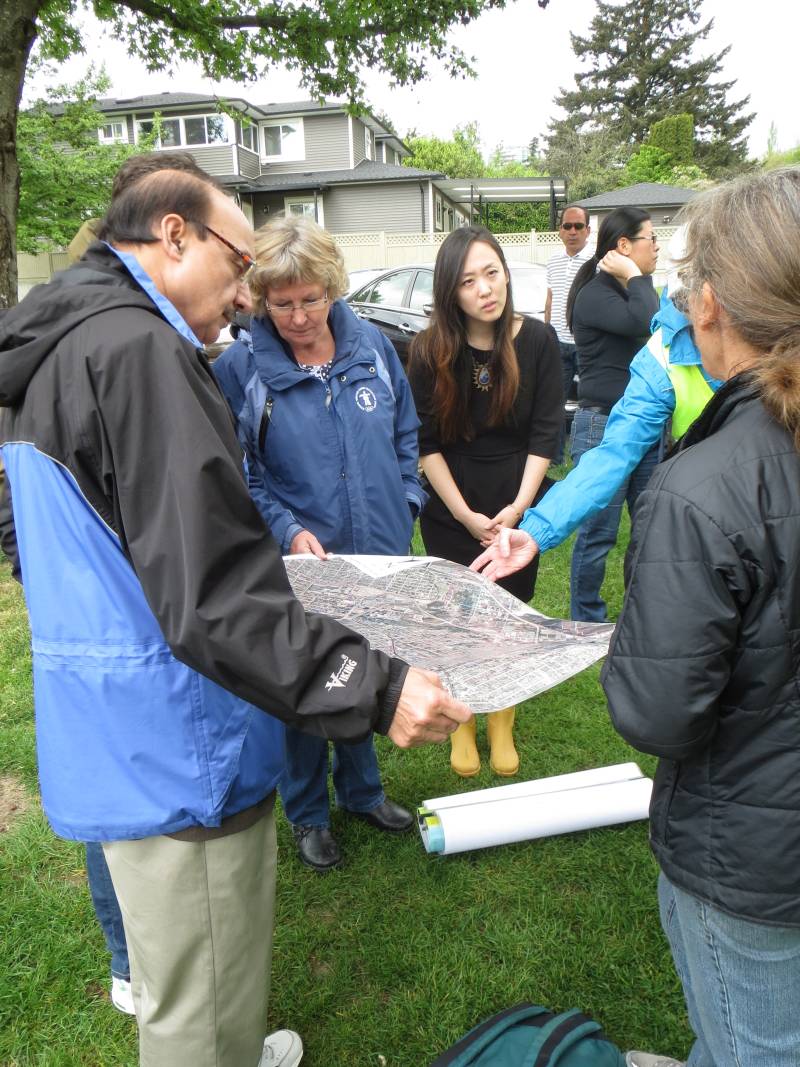 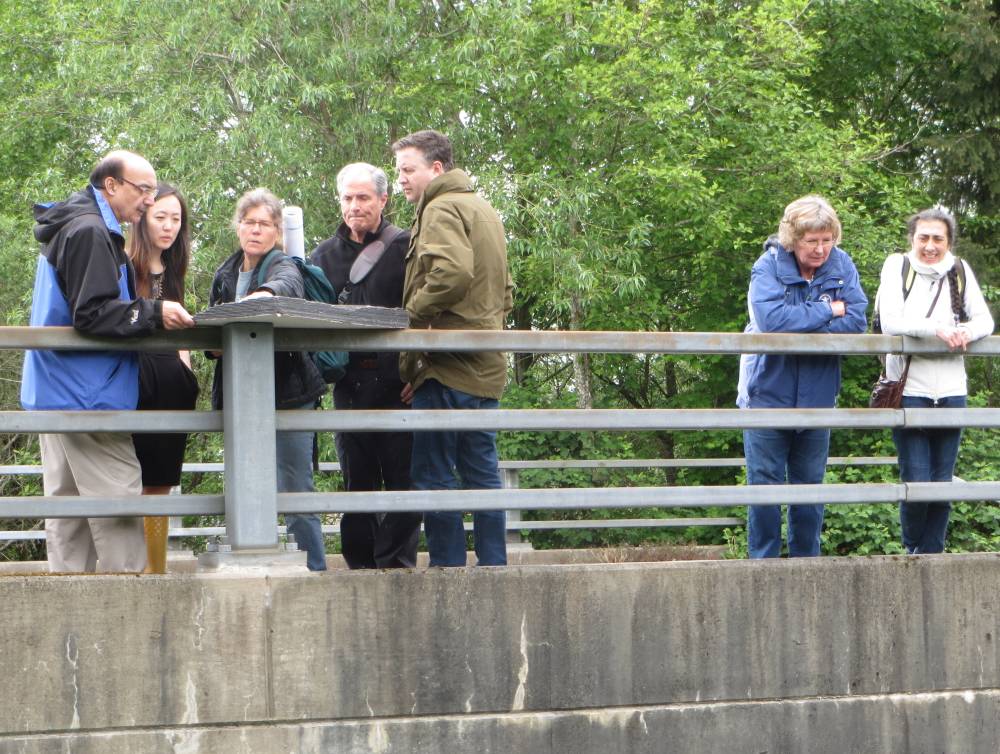 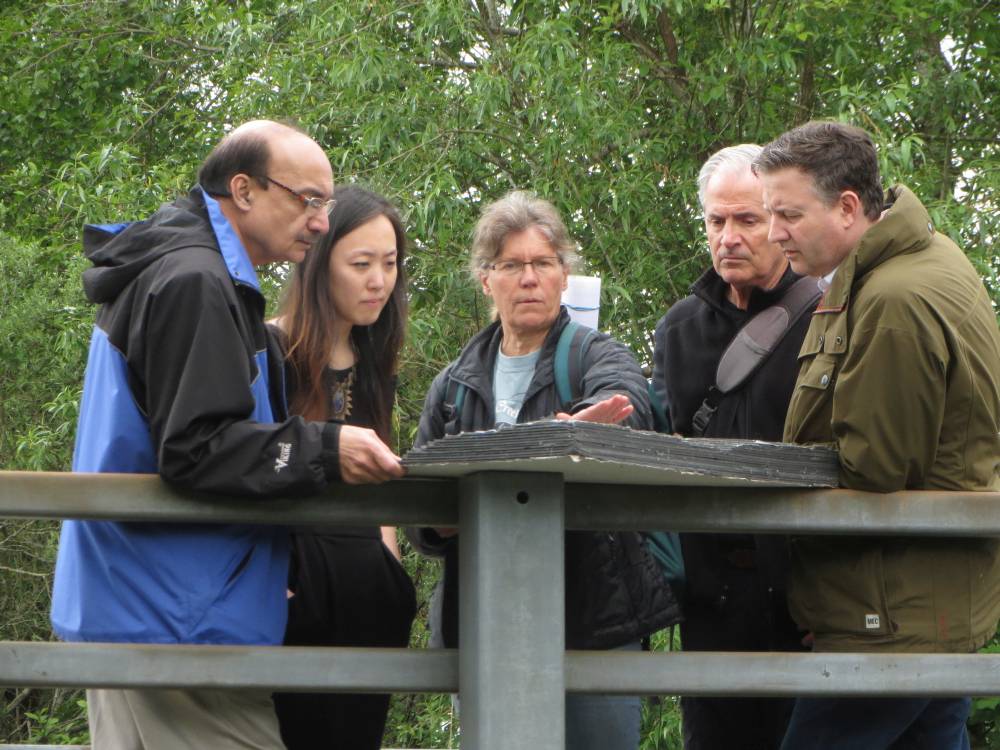 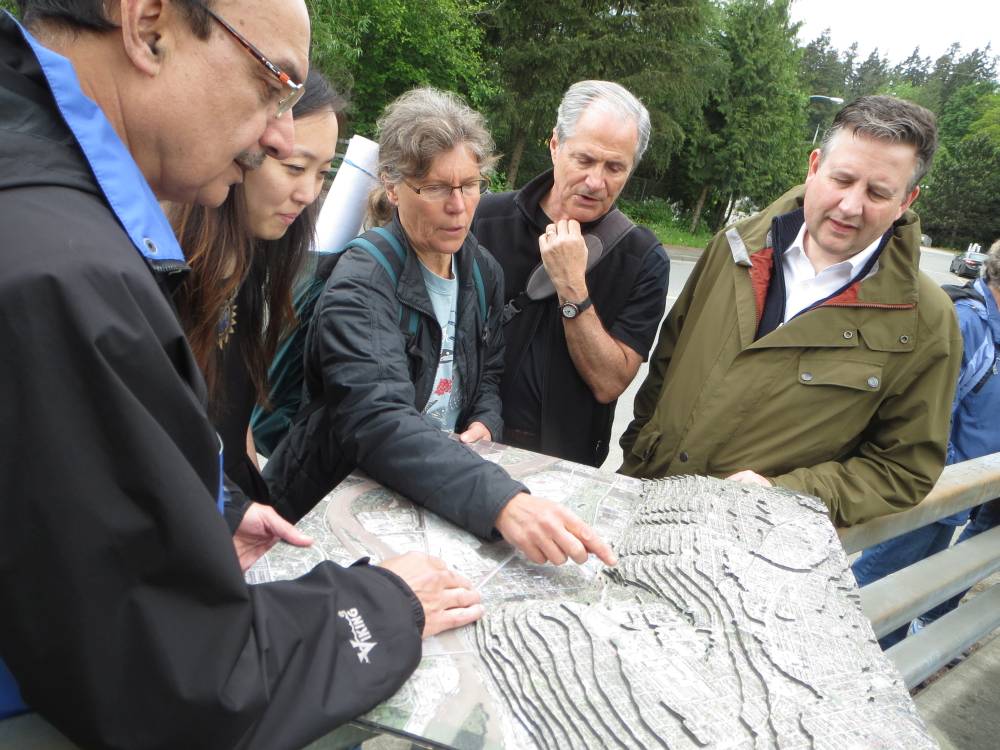 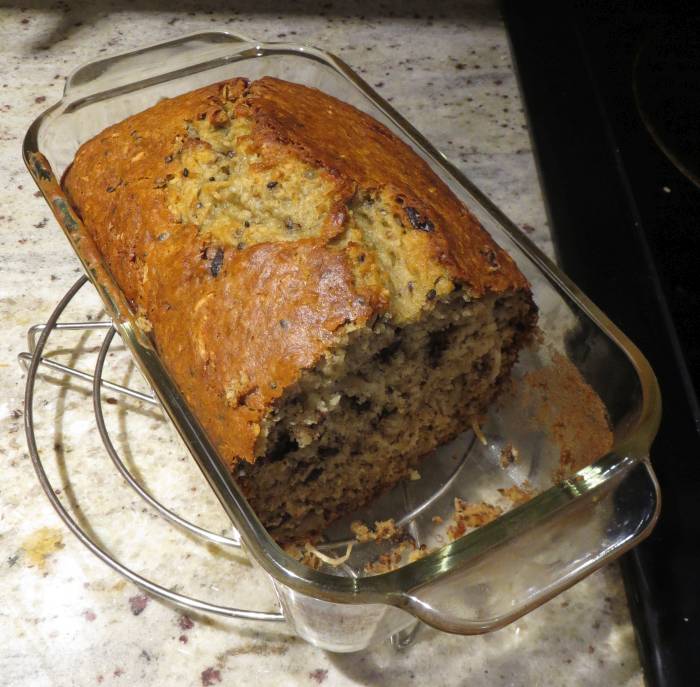 Took a two-hour walk along Fraser Foreshore Park in Burnaby, BC, today. 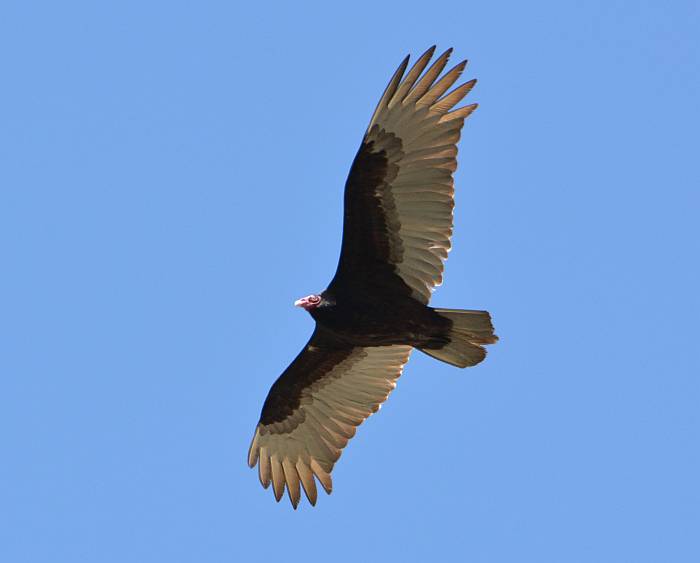 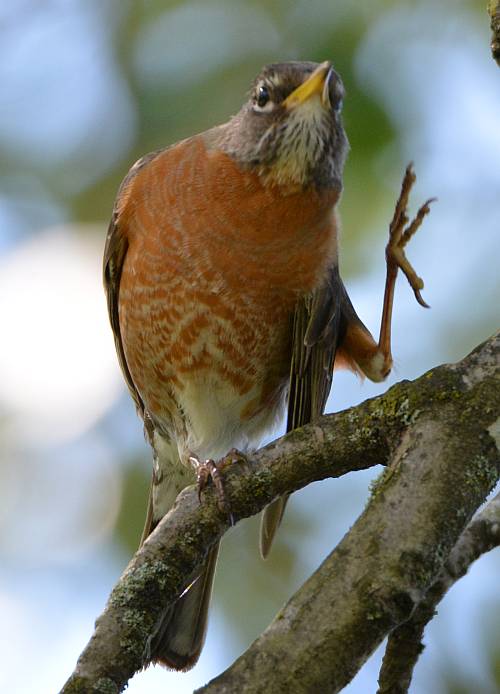 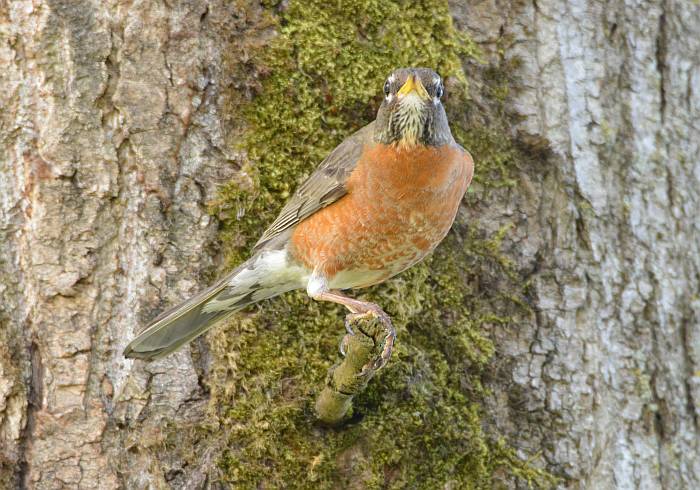 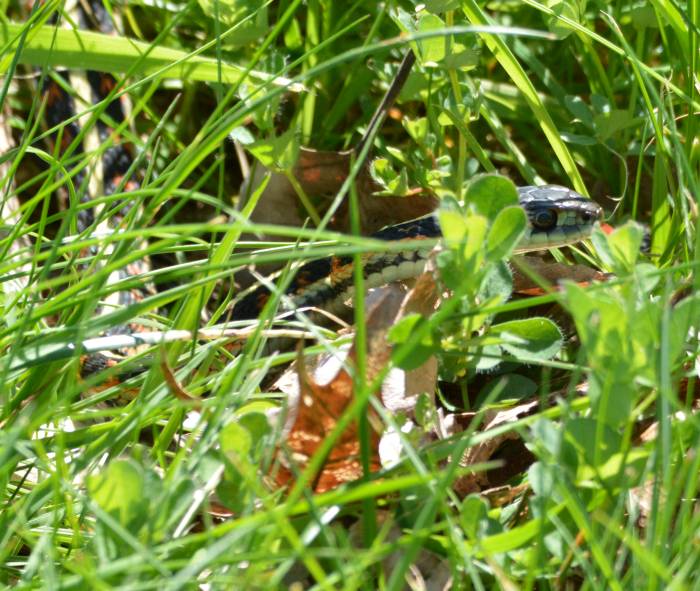 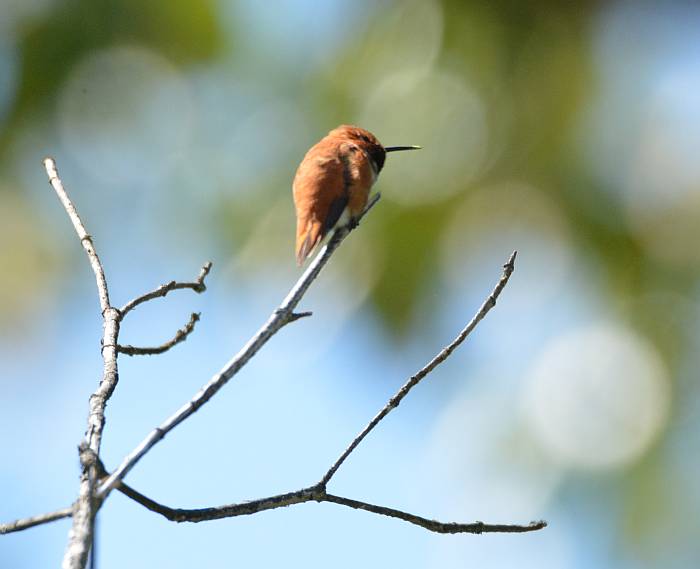 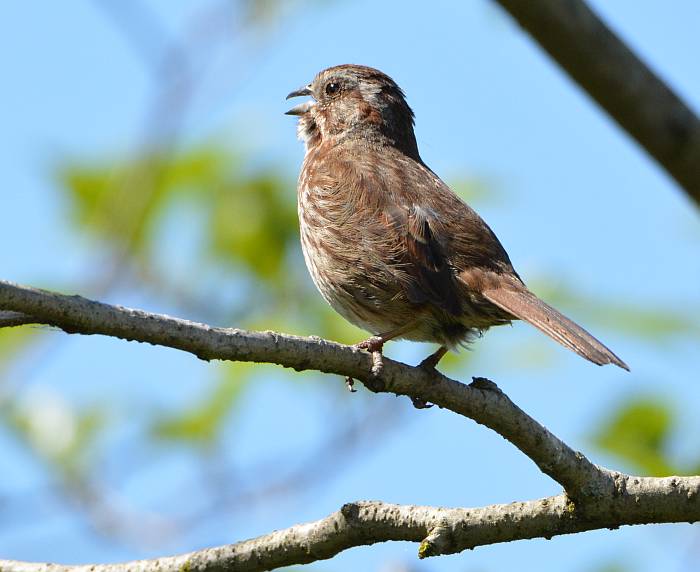 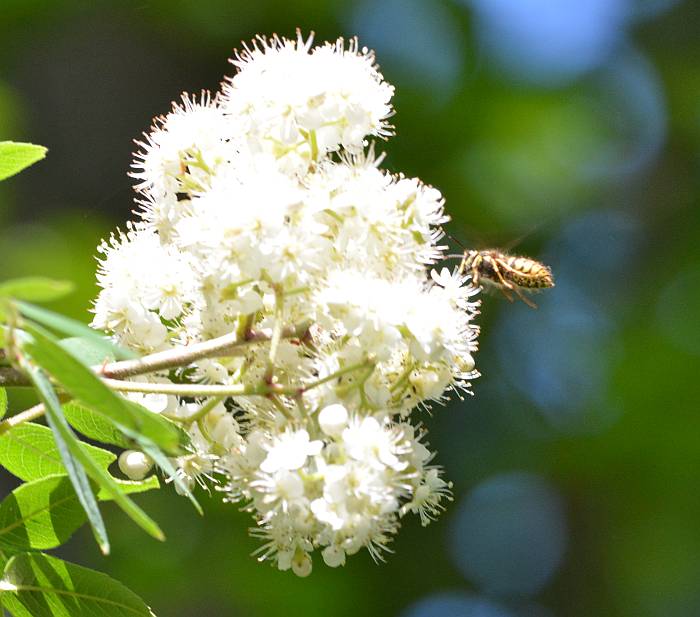 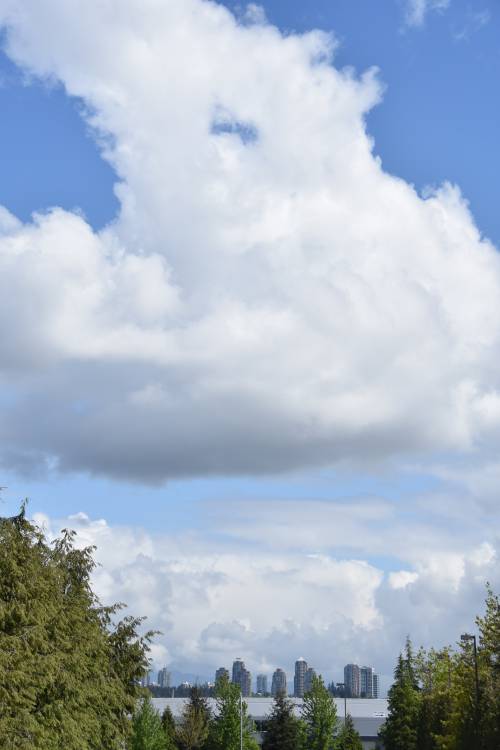 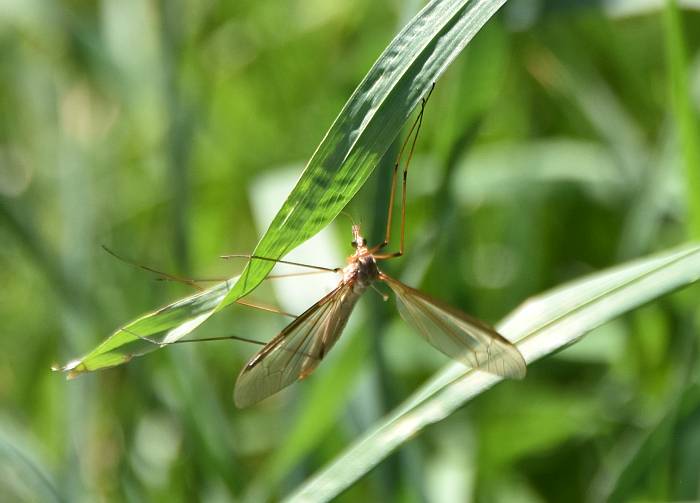 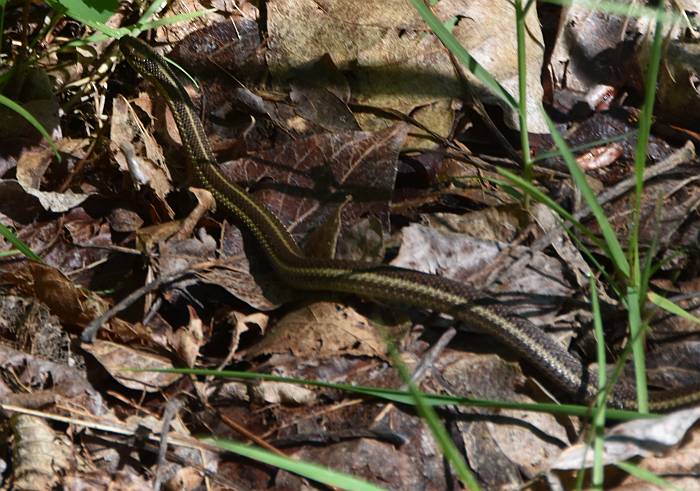 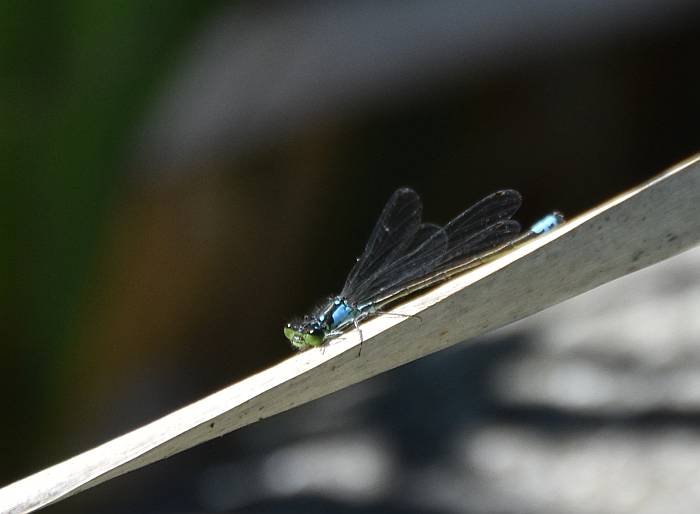 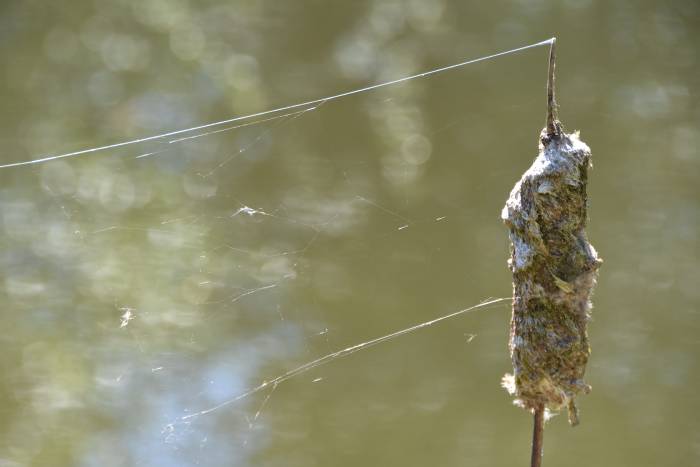 Sunday, April 24 from 10:00 am at the Cameron Recreation Centre in Burnaby, Bc. 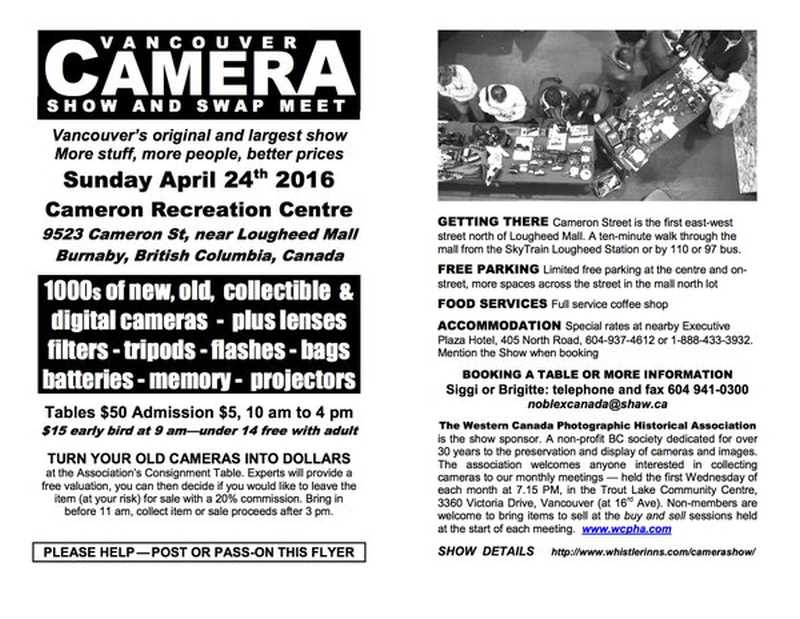 Lots of folks have been getting the CRA SCAM phone call. I reported it to the Burnaby RCMP crime prevention folks, and here’s their response:

On our post-work south slope Burnaby walk today we saw not one, but two, garter snakes.

Yee-haw! We’ve been seeing them less often over the years, so it’s wonderful to know they’re still around.

They are totally harmless to humans, and if you’re a gardener, they eat slugs : -). 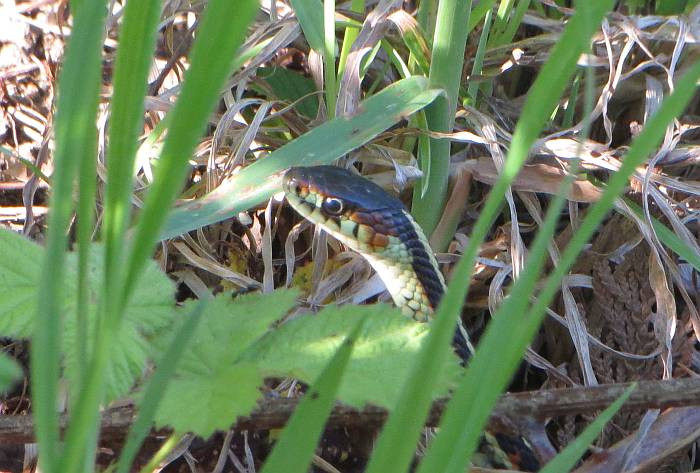 I am taking the liberty of re-posting this in its entirety.

In light of the great interest in the 2016 BC Endangered Rivers List, and with only a year remaining to the next provincial election, a group of BC’s largest conservation and recreation groups are coming together to ask all provincial political parties to develop policies and positions relating to rivers as part of their election platform. Among those leading the campaign are the 100,000 member Outdoor Recreation Council and the 50,000 member BC Wildlife Federation, along with other key groups with significant public outreach, such as the Watershed Watch Salmon Society, West Coast Environmental Law and the BC Federation of Drift Fishers. Other groups, such as the David Suzuki Foundation, have also voiced their support for this initiative. The groups aim to generate a greater public awareness of the importance of these issues and persuade all political parties to take positions on these matters.

“Promoting and generating such discussion is timely in that many British Columbians view the proper care of rivers, and our water resources in general, to be as among our most pressing environmental issues,” said Mark Angelo, Outdoor Recreation Council Rivers Chair. “We believe there would be great public support for a multi-faceted approach aimed at addressing a host of important issues pertaining to rivers and water,” he added.

Among key elements that should be included in river-related policies are:

1. A heritage river component that would re-invigorate the BC Heritage Rivers Program. This program, which has languished since 2001, helped to provide a greater focus and profile for key rivers and had benefits from a planning and public awareness perspective in its early years. New rivers should also be added to the system.

2. Establish a significant funding program aimed at supporting key river restoration and management projects (perhaps similar to what the BC Conservation Foundation administered in recent years which was effective in levering technical, community and financial support). Among projects deserving of funding range from the Cowichan River (where the Province should play a leadership role in bringing partners together to raise the weir at the river’s top end so as to improve summer flows and lessen water temperatures) – to the Seymour River (the Province must be a major partner and contributor along with the DFO in resolving damage caused by the rock slide) – to the Heart of the Fraser (establishing a process that would aim to develop a collaborative management plan for the incredibly productive Hope to Mission stretch of the river).

3. A portion of the budget referred to in #2 should include a funding pool that non-government groups, such as local stream-keepers and river guardians, could apply for to help fund their river and stream restoration efforts. The administration of this fund should include collaboration with other water funders.

4. Ensure the actual on-ground implementation of the Water Sustainability Act so that truly appropriate flow regimes do, in fact, exist on rivers and streams that have regularly suffered from excessive water extraction at the expense of fish. Appropriate, biologically defensible objectives for flow and water quality should be legally enforceable. Monitoring, compliance and enforcement are key. There are many such examples that have been profiled in the endangered rivers list over the years.

5. Advocate for the development of water-use plans on rivers with dams outside the BC Hydro umbrella. While BC Hydro has developed such plans for many of its impoundments, other dam operators have not (e.g. for Metro Vancouver dams on the Seymour and Capilano Rivers, a flow agreement was reached by stakeholders relating to improved water releases that would be beneficial to fish but there has been no actual implementation). Water use plans can help ensure that water releases from dams take place in a more fish-friendly manner.

6. For the Fraser River estuary, the Province should be an advocate of the need for a new coordinating multi-agency group that would better assess cumulative impacts stemming from the many large projects now underway (such as Roberts Bank terminal 2, Richmond Delta bridge, jet fuel transport, etc.) and initiate a much needed process to develop an environmental sustainability plan for the estuary area. From a jurisdictional perspective, this requires working with other parties and jurisdictions but the Province could wield substantial influence. In a broader vein, BC could potentially become a leader in developing methodologies by which to assess cumulative impacts and carrying capacity in areas such as the Fraser estuary where there are multiple and competing usage demands.

7. Develop a plan to revitalize the provincial government’s ability to properly monitor and protect the environment and fresh water resources.

8. Ensure climate change is adequately considered in all future decisions that relate to river management, water extraction, diversions, water licensing, etc. A cumulative effects management framework for watersheds and landscapes is required that includes climate change and which was recommended by the Auditor General.

9. Based on recent successes in Britannia Creek, the Province should explore further dam decommissioning possibilities elsewhere in the Province for older dams that have outlived their usefulness. In 2015, the Province spearheaded the successful decommissioning of 3 older dams that were no longer in operation on Britannia Creek. This initiative was first advocated by BCIT and the Outdoor Recreation Council back in 2001 and the removal of these structures has had significant benefits from an environmental and public safety perspective, while helping to restore the creek’s aquatic ecosystem.

10. There is a need for a more precautionary approach to the way proposed, potentially polluting developments in sensitive areas are assessed. In light of recent ill-conceived proposals, such as the Aevitis hazardous materials plant beside the Fraser River, and contaminated soil dump proposals near the Chehalis River and Shawinigan Creek, there is a need for the development of specific criteria that any project proposed in sensitive areas would have to meet up-front. Failure to do so would effectively block the proposal at a much earlier stage and save a vast amount of time and effort by locals and conservation groups in opposing projects that should never have gotten off the ground in the first place.

The above list is not necessarily meant to be all inclusive. In addition, new issues may well emerge over the coming year. However, our groups believe that the components listed above would formulate a sound basis for river-related policies that should be embraced by all of BC’s political parties.

Volunteer streamkeepers completed our winter/spring bug count on Byrne Creek in SE Burnaby, and the results are Poor to Marginal as per The Streamkeeper’s Handbook methodology.

Unfortunately, this is par for the course. In over a decade of sampling on this urban creek, we’ve rarely seen an Acceptable sample, much less a Good one.

We get very few aquatic invertebrate species in our samples, and the ones that we do net are tiny.

The only way to improve these results is to get more road wash intercepted into rain gardens, swales, and biofiltration ponds. It’s this constant non-point-source wash of pollutants into storm drains that continuously impacts the water quality in the creek. 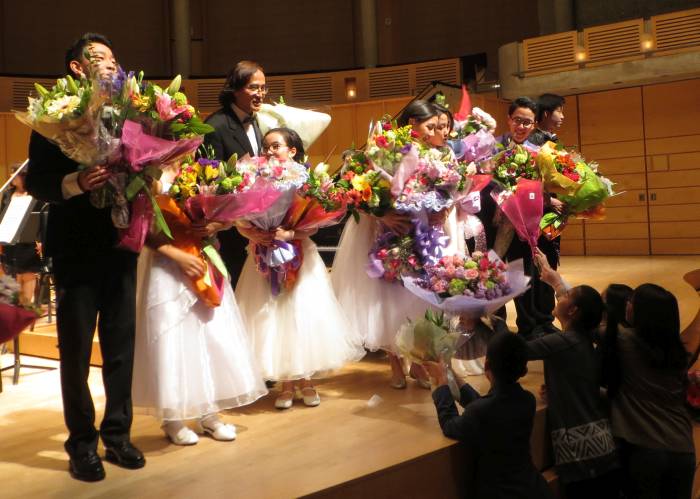 I’ve been attending the Salish Sea Ecosystem Conference, and as at previous ones, I am yet again in awe of coordinated volunteer – municipal – tribal (in Canada First Nations) – state – federal conservation efforts in the US.

Yes, we like to slag our southern neighbours for many things, but they are way ahead of us on many others.

Canada? We’re doing good here and there, but we suck at coordinated action. And in Canada, for the last decade at least, the burden has increasingly fallen on volunteers, with federal and provincial governments abdicating their responsibilities, and slashing enviro-related staff and funding.

A major hurt is that Canada is still so 20th century. To see the ruling-party hydroelectric dam platform in BC is to read something from the 1950s.

The US is demolishing dams, setting rivers, wildlife and salmon free, unleashing renewable, long-term natural and economic potential along the way.

Here in Canada, our governments still want to pour concrete in pristine rivers and flood massive areas of our most productive farmland and traditional First Nations hunting and fishing territories.